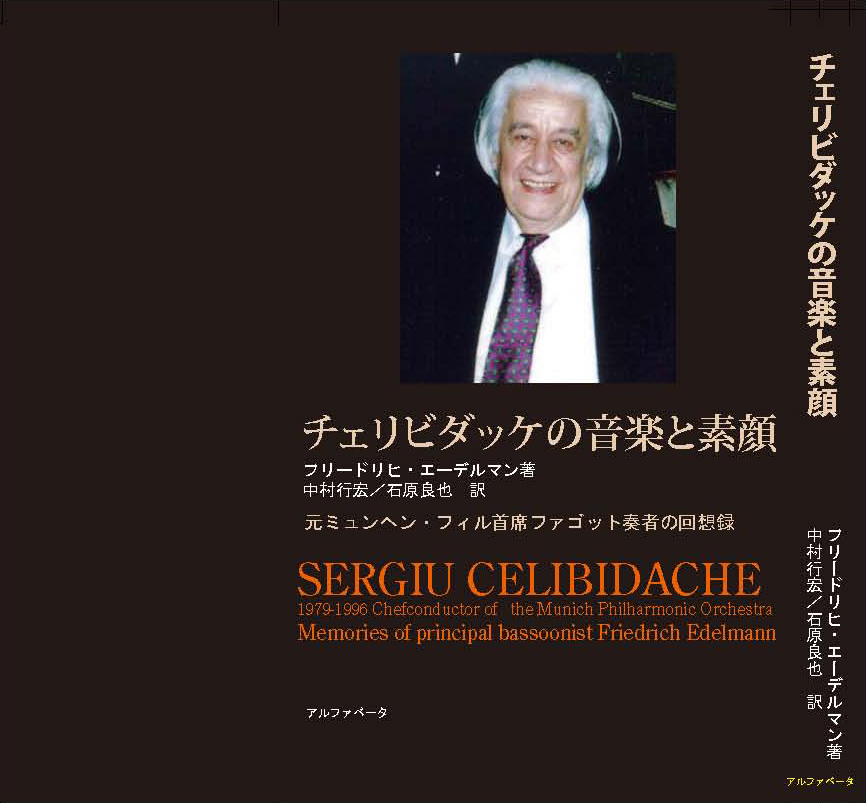 In all the string sections, Celibidache tried to form a unity of sound, of
phrasing, of starting and ending together.

Sometimes in the rehearsals, in order to achieve these results, Celibidache
worked with one particular string section for a whole half-an-hour,
while the rest of the orchestra had to wait. But the Maestro expected the other orchestra
members to listen to his rehearsing so that they would apply all these
principles in their own playing. Even the winds, like the flute section or
the bassoon section, were supposed to learn from this rehearsing with the
strings. For example, if the clarinet entrance was too direct or hard-sounding,
he would say: “Here you have to start with an up-bow”.

An “up-bow” would of course normally only apply to a string-player, the result
of which makes the start of the sound much softer and less direct.
This is a real challenge for a wind player to try to imitate an “up-bow” effect
to try to get the sound quality of a whole string section. This was most
important for Celibidache as everybody had to listen to the other players
and sections to try to get these particular sound qualities. As a side-effect
of this “trying to imitate the sound qualities” all groups played automatically
much better “together” than before and subsequently also better in tune.
For example, I also heard him say to a tuba-player “This must sound like a
double bass” or to the bassoon “This staccato has to sound like a pizzicato”,
a pizzicato being a string plucked with the finger.

There is a passage in the Classical Symphony of Prokofieff where the bassoon
staccato is in unisono with the double bass pizzicato and Celibidache
rehearsed this a very long time until the bassoon sound and the double bass
sound were perfectly matched, creating a unique tone color. The listener did
not hear the two separate instruments any more but a new single sound.
This was a unique method which only Celibidache used in my over 30 years
orchestra experience, in order to get the orchestra members to listen to the
other players and therefore be together, a unity not only in time but also in
sound and structuring, an un-mechanical, un-technical approach to
music-making. Most other conductors I have played under, even famous ones,
never attempted to achieve any tone colors out of any wind or string instrument
beyond the obvious sounds.

And the renowned professor of violin at the music conservatory in Munich
(Muenchner Musikhochschule) has said one should learn technique and then
the musicality comes automatically afterwards. This is exactly the opposite
method from Celibidache where the technical questions are solved through
the musical approach. This explains why and how Celibidache achieved excellent
results with orchestras, which were not the most famous and most brilliant.
He often said: “Yesterday we played better than we are”, meaning that the
result of the orchestra as a unity was much higher than the simple addition
of the quality of the single players.

For me, although I play a single instrument, the bassoon, Celibidache’s
conception of a round, deep, soft tone has become my ideal of playing. And
I have learned from him to listen to the other players in orchestra or in
chambermusic in a different way than the obvious simple “togetherness”,
but matching with the others in order to create a unified sound with them,
so that ideally the listener is not able to separate one from the other
instrument. If one succeeds with this principle, the instruments are blending
and matching together and are being together in a way, a conductor never
can show or direct with his beat. This is a very basic problem, and Celibidache’s
solution was unique.

WHY IS CELIBIDACHE INCREASING THE NUMBER OF PLAYERS
(STRINGS & WOODWINDS)?

Celibidache was always working for improving conditions for his orchestra. Rather
than asking for a higher fee for himself, he first managed to get a substantially
higher fee for all the orchestra members of the Munich Philharmonic and later
an additional raise for the principle wind players.

He never demanded exorbitant fees as he worked very hard with the orchestra
with many long rehearsals, and only was paid for the concerts and not the
rehearsals. But when Karl Böhm came as a guest conductor and demanded
a higher fee, Celibidache required the same fee.

Celibidache often asked for doubling in the woodwind sections, especially in
symphonies in which other conductors never do this. For instance, in Bruckner’s
Symphony No. 8, we played at first with 6 flutes, 6 oboes, 6 clarinets and
6 bassoons. His first Bruckner’s 8th was performed in a large church in Munich,
the Lukas church. In the newspaper, the “Sueddeutsche Zeitung”, it stated
that Celibidache reached “Furtwänglersche Grösse”, or the greatness of
Furtwängler. (Celibidache claimed to the orchestra that he never read any
of his reviews, but he always knew what was written and it greatly influenced
his mood if it was good or bad.)

In this performance I doubled the first bassoon part. Celibidache had to hear
for instance the bassoon part coming through the big orchestra even if the
dynamics was written “piano”, depending on the acoustics of the hall.
If the Munich Philharmonic performed the Bruckner 8th in a different hall with
different acoustics, then Celibidache changed the places in the score
of the doubling, sometimes even in the concert on the spot.
The whole orchestra had to have their eyes glued on Celibidache to be sure
they could immeditately react if he gave a sign. Woe if they didn’t!
If a player or a section of the orchestra didn’t see his sign for doubling, then
he started to shout at them, even in the concert! Through this doubling of
all the important lines, the listener could hear and understand
the structure in a different way than usual

The brass writing of Bruckner is very dominant since in Bruckner’s time the
volume of the brass instruments was smaller than the modern instruments
of today.

Celibidache’s method of using for example 20 first violins and 10 double basses
and doubling the woodwinds balanced the whole orchestra and all the lines
so that for instance the brass was not overpowering anymore.
After years of training and experience, the orchestra learned to achieve
this same sound-balance with fewer doublings since everyone had learned
to adjust to the other parts.

Other conductors, for instance Georg Szolti, also doubled the winds in a
Brahms-Symphony. But in that case, to play the doubling-part was very
simple: you just had to play all the “forte” and “mezzoforte” places and
nothing else. This was a very easy job, not like the doubling at the
Celibidache concerts, where the doubling could be required at any second
and even in “piano” places.

(END of Excerpt from my Celibidache book)