Here is the text of an interview we had with Tony Sauro, Record Staff Writer, before our concert at University of the Pacific, Stockton.

Couple in marriage, couple in music 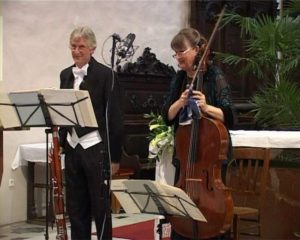 Rebecca Rust and Friedrich Edelmann are a distinctive married couple.

She’s an Oakland native who grew up in Richmond. He was born in Muehlacker, Germany. They met in Belgium as members of the Jeunesses Musicales World Orchestra.

Mainly, though, it’s their instrumental connection.

It works for them. After 39 years of marriage, they tour, teach, perform and record harmoniously and globally.

“Many musician couples don’t last,” Edelmann said. “The challenge is to help and support each other and not try to ‘rival’ the other musician. Or try to prove who is the better one. That only works with mutual respect and tolerance. Then (we) can learn from each other, rather than compete.”

Edelmann, 65, and Rust, 59, do some tutoring, performing and artistic cooperating Tuesday — guiding a master class before playing a 60-minute concert at University of the Pacific’s Recital Hall.

The performance includes three selections from the 17th and 18th centuries (Johann Sebastian Bach and Wolfgang Amadeus Mozart included) and three from the 20th century.

Among them is “Songs of Ascents” by Max Stern, 67, an Israel-based composer with whom they work.

“It’s based on old Hebrew melodies they sang going up onto Mount Zion,” Edelmann said of the Valley Stream, N.Y.-born Stern’s composition. “The bassoon sounds like a shofar (horn-like instrument) a little. The cello’s a little bit like a harp.

“It’s sort of biblical. It’s not modern. It keeps the old melodies and characteristics. We had to learn to do it differently.”

They diverge, too, in their approach to mentoring young musicians.

“We try to approach it musically, rather than technically,” said Edelmann, who’s staying with Rust at a friend’s Berkeley home during a four-week California trip that extends from Fortuna to Escondido. “You have to like music — love it — in order to do it. You don’t make much money. We’re giving it another kind of viewpoint.”

Name it in their field and Rust and Edelmann have accomplished it. She leads him in CD releases 13-6.

They’ve played around the world, in a variety of configurations and with numerous influential orchestras and musicians. This year, that ranges from a children’s production in Italy to a tour of Japan.

“University is tough enough,” he said. “With competitions, getting good marks, winning auditions. We’re a little more just on the musical side.”

Rust was a legit child prodigy, studying before she was 10 at the San Francisco Conservatory, Stanford and UC Berkeley, then winning major California competitions as a teenager.

The youngest of five children, Edelman grew up in a singing, piano-playing family in what remained West Germany after World War II. Mom Margarita and dad Fritz, a biology, geology and geography teacher, encouraged musicality.

After attempting classical piano, mastering math became Edelmann’s plan — “I didn’t think it was so advisable to be a musician” — but one of his dad’s colleagues also taught bassoon. Friedrich became his pupil.

At 15, mastering a string instrument seemed unlikely: “It was really a coincidence. It developed into something good. Really fast at first.”

“Half-a-year” later, he was playing in an orchestra.

During his lengthy role with the Munich Philharmonic, he became a keen observer of quirky Romanian conductor Sergiu Celibidache (1912-96). He’s written a memoir “Memories of Maestro Sergiu Celibidache” (a collection of magazine articles). It’s been published only in Japan.

While Rust’s cello has royal lineage, Edelmann plays a 1938 instrument crafted by Heckel, a German company that helped develop bassoon-building techniques at the 19th century’s end.

“It’s very valuable,” he said. “Before the war, they still did everything by hand. Now, it’s an assembly line in a factory.”

Their distinctive marriage and musical philosophy are anything but.

“It’s very rewarding, since we can tour together around the world and not be separated,” Edelmann said of the Munich-based couple. They have no children. “That really makes the relationship much stronger.”